Lionfish actually come from the Indo-Pacific and the Red Sea, and there, in their native habitat, they have a number of predators that have been catching and eating them for millennia. Those predators that are known to definitely eat lionfish are as follows: 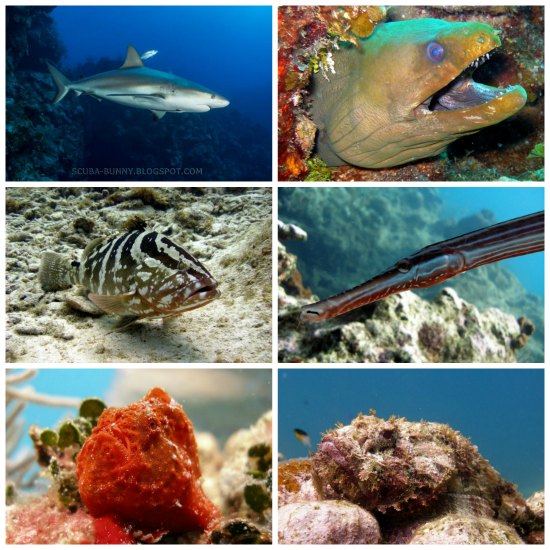 So which of those predators living in the Western Atlantic Ocean, Gulf Of Mexico and the Caribbean Sea are known to have added the lionfish to their staple diet? The answer to that question is currently NONE. The local predators do not identify these recent immigrants as food.

However, over time nature will take its course and presumably, those six predators will begin to eat lionfish. But how long will that take? 1, 10, 100, 1000 years? Or is it already happening?

If we take the six predators in order, there is some evidence of interest in lionfish from some of them. These are my thoughts:

(1) Sharks – Well if you look at my post “Do sharks eat lionfish? They do now!” you can see some very local evidence of one shark eating a healthy lionfish. 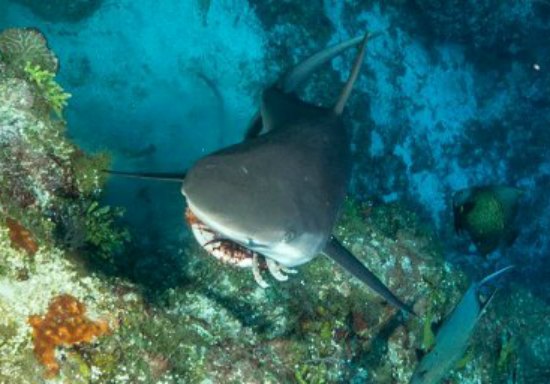 (2) Eels – Moray eels have dreadful eyesight, but an immense sense of smell and they do most of their hunting at night. So I am 100% convinced that moray eels have and will catch lionfish at night, as the lionfish are asleep like all the other reef fish. I can see how daytime predators will avoid lionfish, but at night the moray eel wouldn’t know one fish from the next – would they??.

Enjoy this video of an eel here in Cayman hunting a lionfish and them both leading a merry dance.  It looks like the lionfish is thinking of using the diver for cover!

(3) Grouper – Have a look at this video where you will see a grouper herding a lionfish away from the safety of the reef and into open water. It is the first recorded observation in our local area of a grouper hunting and finally eating a live and healthy lionfish. It is my opinion that this grouper is hunting the lionfish. However, whether the divers distracted the lionfish enough to somehow help the grouper I cannot tell?

(4) Cornetfish – We have a very close relation of a cornetfish in our local waters here called a Trumpetfish.  If you have ever watched these predators moving around the reef when they are in obvious hunting mode they are clearly a fish that uses stealth and cunning to creep up on their target and then they accelerate towards their prey at an amazing speed. You can imagine how a cornetfish would pick off the smaller lionfish but probably only when the lionfish themselves are out and about hunting at dusk and dawn. 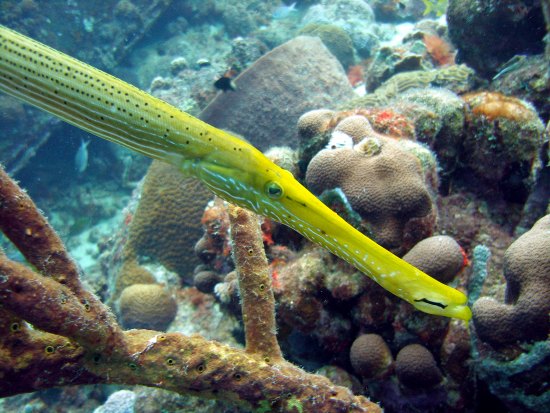 (5) Frogfish – These amazing and weird fish just sit around and wait for their victims to come to them. When their meal gets close they pounce at lightning speed opening and closing their mouth in a fraction of a second. Other frogfish have a lure attached to the top of their head that they wave around to attract their next meal. Have a look at this video below of a frogfish (without a lure) eating a lionfish. Sorry about the awful music, but also notice the MUCH bigger frogfish in the front. What size lionfish could that monster eat?

(6) Scorpionfish – Like frogfish the scorpionfish just lies and waits for its next victim to get too close. Have a look at this video below where you will see the lionfish is swimming by, minding its own business when it finds out that the rock it has swum near is not a rock. Most of the video is watching the scorpionfish trying to swallow the lionfish whole.

So there is some hope that nature will take its course and the lionfish problem we have here in the Western Atlantic Ocean, Gulf Of Mexico and the Caribbean Sea will be resolved. However, I’m afraid the lionfish have had too much of a head start. They have taken over in lots of areas where there appear to be just too many to ever be brought back under control.

However, we must keep catching as many as we can to limit the numbers on our dive sites etc to help our local fish and coral reefs. And lionfish can help out a little themselves to reduce their own numbers as they are cannibalistic. I have seen larger lionfish devour smaller lionfish in an aquarium. Every little help.

A big THANK YOU to Jay Easterbrook who read this post and commented as follows “Have been told by NOAA scientist that the best Pacific predators of Lionfish are birds and small fish that feed on the egg sacks that float to the surface”. Well yes, it is very obvious but they must be the top predators of lionfish. I didn’t think of it. Thanks again Jay!

PS – thanks again to Simon Morley of scuba-bunny.blogspot.com for letting me use his shark photos. 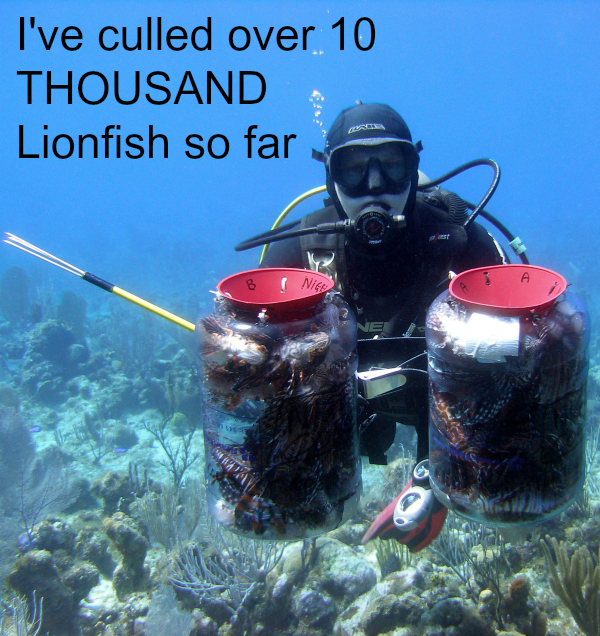 5 Responses to What eats lionfish?