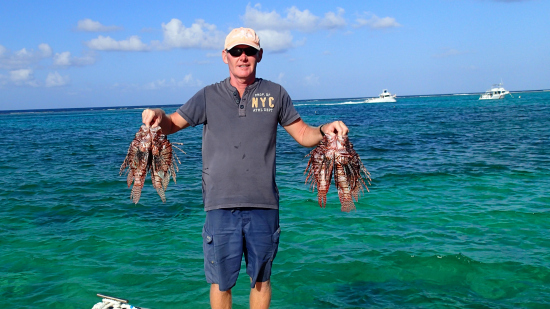 In the last year or so we have seen a remarkable drop in the number of lionfish here on Cayman reefs. So I thought I would go back through my Excel spreadsheets to gather some data, to see how many days it took me to catch each 1000 of the 10,000 lionfish that I have caught so far.

I started killing lionfish here on Grand Cayman back in October 2009 but I did not actually start recording my kills until the 17th June 2010, so I have used that date as my start date.

In the early days, we used nets and didn’t see that many, so it actually took me nearly 2 years to catch my first 1000 lionfish. However, over time we saw more and more and they were getting bigger so we moved onto using pole spears. My second 1000 lionfish took me about 1 year and 4 months to catch so things were speeding up. 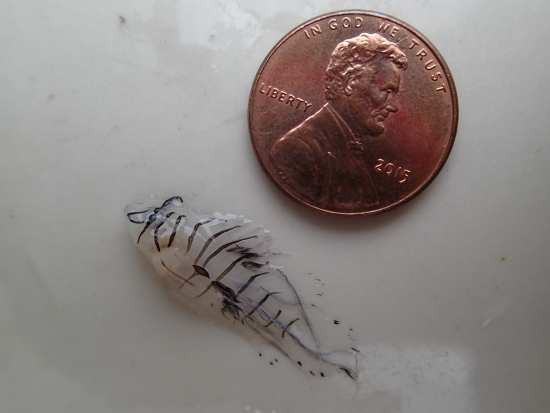 Here’s the table showing you how many days it took me to catch every 1000 lionfish. 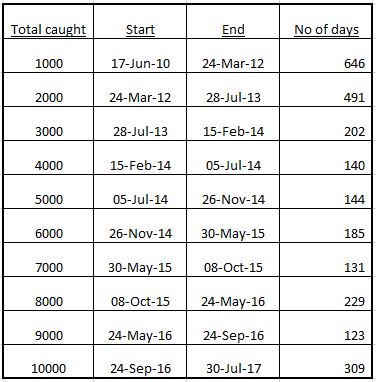 And then from 2013 the numbers of lionfish we were seeing started to really get out of control. We were seeing huge differences in the number of reef fish that were still alive on our coral reefs. I always tell people that when I arrived back in Grand Cayman back in July 2009 and I went snorkelling or diving the smaller reef fish were much more plentiful. A typical large coral head inside the barrier reef could have up to 200 small fish (less than 4 inches) living and swimming in that area. But as the lionfish got much more plentiful and much bigger they started to gobble up the smaller reef fish. It got to the stage where the 200 small fish on some of those coral heads, that we regularly visited snorkelling and diving, was reduced to about 5 to 10 individuals. It was very sad.

You will see from the table that my third 1000 lionfish took me approximately 7 months to catch. And then there were many cases where it only took me 4 or so months to catch 1000 lionfish – 123, 131, 140, 144 days. You will notice that some of the 1000 lionfish took a bit longer if the time included the winter months. Although we live on a wonderful Caribbean island, the winter months still make it much more difficult to go out lionfish hunting, as the winds blow and the seas are too big to launch our little 17-foot fishing boat. 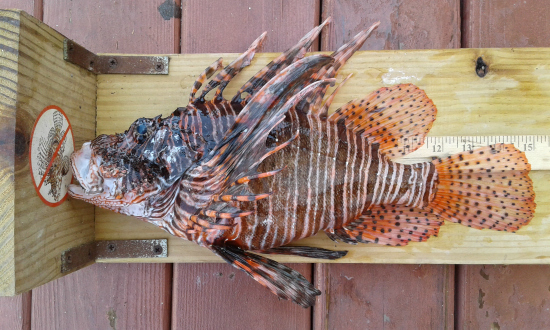 The tenth 1000 took me 309 days and there are quite a few reasons for that. The main reason is we are seeing a dramatically reduced number of lionfish. Perhaps all that culling is having an effect or something from nature is doing something? Is the increased Sargassum weed we are seeing affecting the lionfish egg sacks by diverting them elsewhere?

The idea that all the lionfish are staying down deep to stay away from divers I think is ridiculous. That idea assumes that the lionfish talk to each other about us and what we are doing. That does not happen. Why am I so sure? Because when I come across a group of lionfish that are gathered together I can kill every single one of them without any of them hardly moving, even when their buddy is just 6 inches away.

I have also not been going out lionfish hunting on my boat anywhere near so much as I used to, for various reasons. I need to get that motivation back so that I can start killing 100’s of lionfish each month like I used to, but that’s if they are there to catch.

And if you want to be able to dive as long as I can then why not buy my very own book Save Your Breath. See the link below. 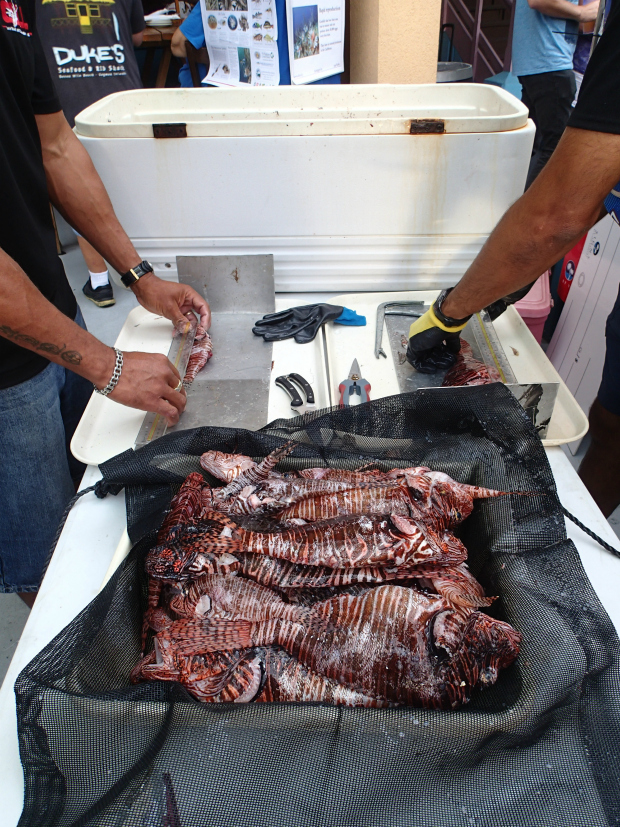